So this morning I finally finished Death From Above. 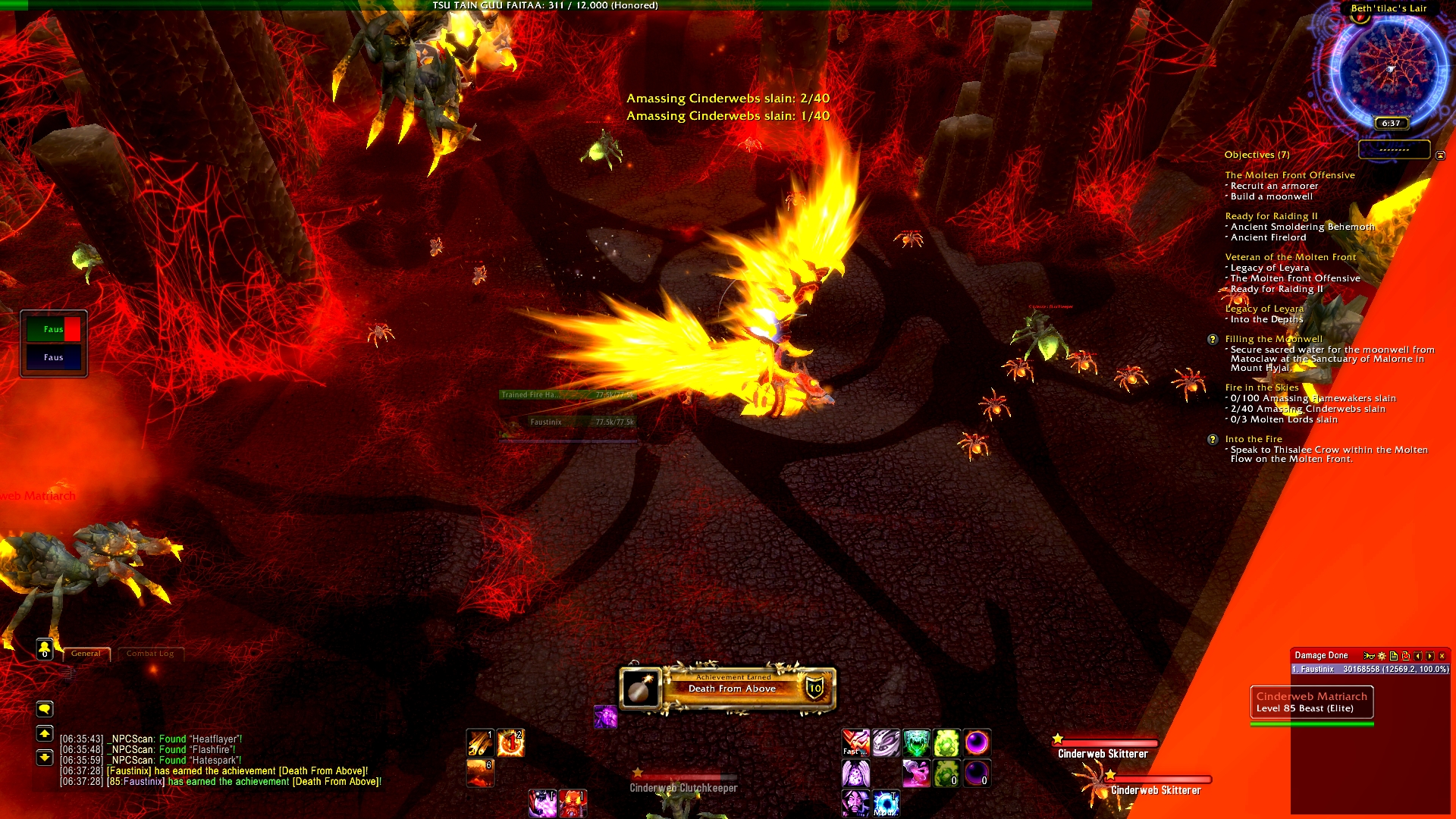 This got me to thinking about ‘good RNG’ vs. ‘bad RNG’ when it comes to achievements.

Good RNG is like a good lab experimemnt: it only depends on one factor. An example would be Just Another Day in Tol Barad. This can really be thought of as two sub-achievements: the quests from the Tol Barad Peninsula and the quests from Tol Barad itself. The good news is, though, this really only depends on one thing: which dailies are available. Haven’t seen a daily on the peninsula side yet? Just keep going back, you’ll see it eventually. Haven’t seen a daily on Tol Barad proper? Keep checking back for your side to win. Even if you defend successfully, this can still cause your dailies to change.

In short, the best RNG-based dailies (for certain definitions of the word “best”) are the ones you can overcome with sheer determination, doggedly returning every day. The only thing you’re really trying to overcome is a pseudorandom number generator (which is a whole other can of worms). This does, despite the fact that Narci will probably kill me for calling it “good” in any way, shape, or form, include Lost in the Deeps, required for Rock Lover. There’s no extra steps required other than opening the Therazane daily: you just show up, see if Lost in the Deeps is there, and if not, you come back tomorrow.

Now let’s look at Death From Above. On the surface this seems much the same: shoot the randomly-spawning elemental bosses while running a bombing mission. However, the very structure of the Molten Front precludes this being good RNG. Let’s look at the steps required:

Seems fine, right? Now let’s throw a twist into it.

The latter portion, by itself, would be fine. If I could do the bombing mission every day but I stood a chance of not seeing the elementals I needed, oh well. I finish the bombing mission and move on. However, you can’t do it this way - basically, you have to hope that on the day you can do the bombing run, that the elementals you need are up, and if not, you have to try again two days later, when it’s entirely possible they’re up again. It’s RNG behind a gate that doesn’t allow you to keep trying. It tells you to piss off, come back two days later.

It’s a pretty terrible design, and I’m a bit worried we’ll see it again in Mists, since out of the 300 or so daily quests, only 40-something will be available each day. Here’s hoping the ones you need are up.

Afterword: The trick to forcing this achievement into completion

Note: if you’re still working on opening all the portions of the Molten Front, this will slow you down (not by a lot, if you can knock it out in a day or two, but if you’re unlucky, this could lose you a lot of seals). If you’re all done, though, carry on. Most of you are likely done with this place by now.

Doing this means you’re usually going to be doing How Hot and Territorial Birds every day. Anren seems to appear down by Thisalee if you need to steal an egg. Tholo sends you to measure the temperature of lava if you bomb that day. (P.S. Tholo: lava’s temperature is ‘really frigging hot.’) You cannot, as mentioned, get Strike at the Heart, nor can you do any of the Shadow Wardens quests. Hopefully you’ll be able to knock this out in a day or two and not lose a ton of seals!