One of the most important aspects of any MMO is its user interface, or UI. The story could be fantastic, the gameplay engaging, and the player base friendly, but if the interface through which you interact with that world is clunky or ill-designed, the game itself becomes a laborious chore. A lot of SWTOR’s UI will probably need to be played for its functionality to be seen; fortunately, SWTOR does seem to have solved one of the major problems of MMO UIs: information placement, and that we can talk about now.

I’d like to take this examination further back than WoW, but to be honest, I wouldn’t know an unmodded EQ, EQ2, or UO user interface from Adam, having never played any of them. Instead I’ll start with the first MMO I sank a lot of time into: Final Fantasy XI. Picture from 1up’s “The Grind” column; click to embiggenThere are a lot of things we can say about FFXI’s UI, and none of them are very nice most of them can be summed up in one sentence: this was a console user interface developed by a primarily-console developer and shoehorned onto an online game.

But it’s also a prime example of terrible spacing of UI elements. One thing that’s consistent about MMOs is that your character, as your viewpoint into the world (so to speak), is the center of the screen - and the rest of the info is scattered to varying degrees around them.

It’s an established fact in design (and art, too) that the less the eye has to travel to reach a piece of information, the easier it is to comprehend and use. You might think of it as a basic design principle; it’s certainly been studied. So with that in mind, let’s look at that FFXI interface again. It really almost seems like work was put into making your eye roam as far as possible.

These are all pieces of info that are crucial to know at any given time, and even in FFXI’s sparse user interface, they are as poorly placed as they could possibly be.

It Gets Better… But How Much?

Now let’s move on to the interface that gets copied time and time and time again, the interface of World of Warcraft. Yes, I know, WoW’s addons allow an unlimited amount of customizability, but let’s assume for a second they didn’t - remember, there was an era before addons - and take a look at the UI a new user gets (mostly) confronted with. Pic courtesy of @noelove. Click to see full-size.WoW’s UI has some serious improvements over the previous example. (And how.)

For all that, though, WoW has a lot of stylistic fluff - and a lot of info people would prefer to see spelled out is left to vague visual cues - I mean, how red does the boss’ portrait have to be before I pull threat again? And some of its placement leaves… something to be desired.

Click to embiggen.It’s not the best thing in the world, but WoW’s default UI is leaps and bounds ahead of FFXI’s. Let’s look at the ups and downs.

Incidentally, WoW isn’t the only one guilty of that scattered mess. Does this look familiar? Pic courtesy of… me. Click to embiggen.Or rather, should I say… Still me. Click to embiggen. As usual.It’s almost a carbon copy of WoW’s UI placement, but there’s one important difference: - you can move literally every piece of that visible UI, scale it, and so on. (I haven’t bothered yet… but the more I write about UIs in this post, the more I think maybe I should work on that.) Being able to move elements around - if the UI by default isn’t the greatest - is a good compromise.

Another game set in a galaxy far, far away let you do just that… Customized UI pic courtesy of @asros. Click to embiggen.Star Wars Galaxies permitted movement and (presumably) resizing of UI elements. Asros sent me this screenshot (and several others) of his UI, which displays a good principle of UI layout - clustering of essential vs. non-essential, and related, elements. Let’s arrow it up: As usual, click to see full-size.In this case, the red arrows represent crucial information - related to combat, if I’m not mistaken - while the green arrows point to non-crucial information - chat, the minimap, et cetera. Elements of the UI that are related to each other are near each other, though there’s still a lot of eye-tracking involved - things that Bioware would take into account while creating TOR’s UI.

First, go read this developer blog entry on designing the SWTOR UI. I’ll wait. A lot of the philosophy that went into the SWTOR UI (including the mess-of-jumbled-dials “train” vs. sleek-dashboard “sports car” analogy) and its current design is contained therein.

SWTOR’s UI development seems to have been guided by a couple important factors.

Let’s take a look at a screenshot from the Tatooine walkthrough from E3. 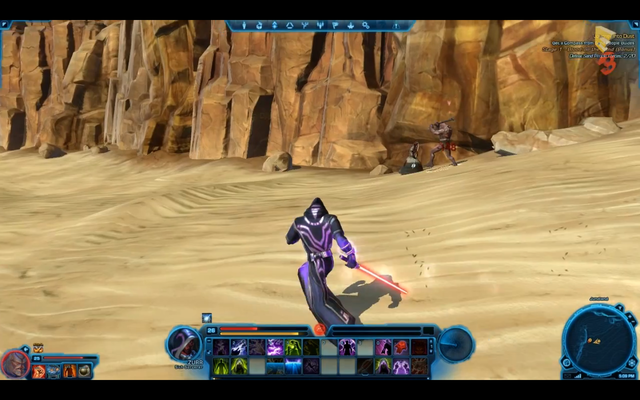 Taken directly from the Tatooine walkthrough. Click to embiggen.Here we can see clearly pick out the grouping elements that Voigt talked about, as well as examples of the importance-to-distance ratio. Shall we? Yes, let’s. 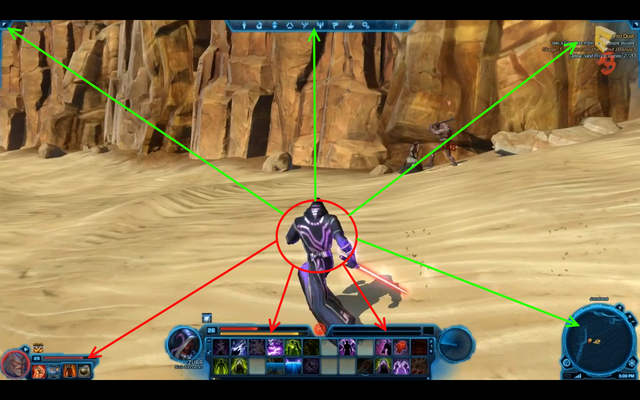 You know what to do to see a full-sized picture by this point in the article.

Is this revolutionary? Not necessarily. Is it different from normal MMO UIs? Enough to take notice of, yes. Bioware seems to have given special attention to clustering of related info, placement of UI elements to (for the most part) reduce eye tracking, and has done a decent job of making important elements bigger and less-important elements smaller. Time will tell if this was wise planning, but right now?

It looks damn good to me.